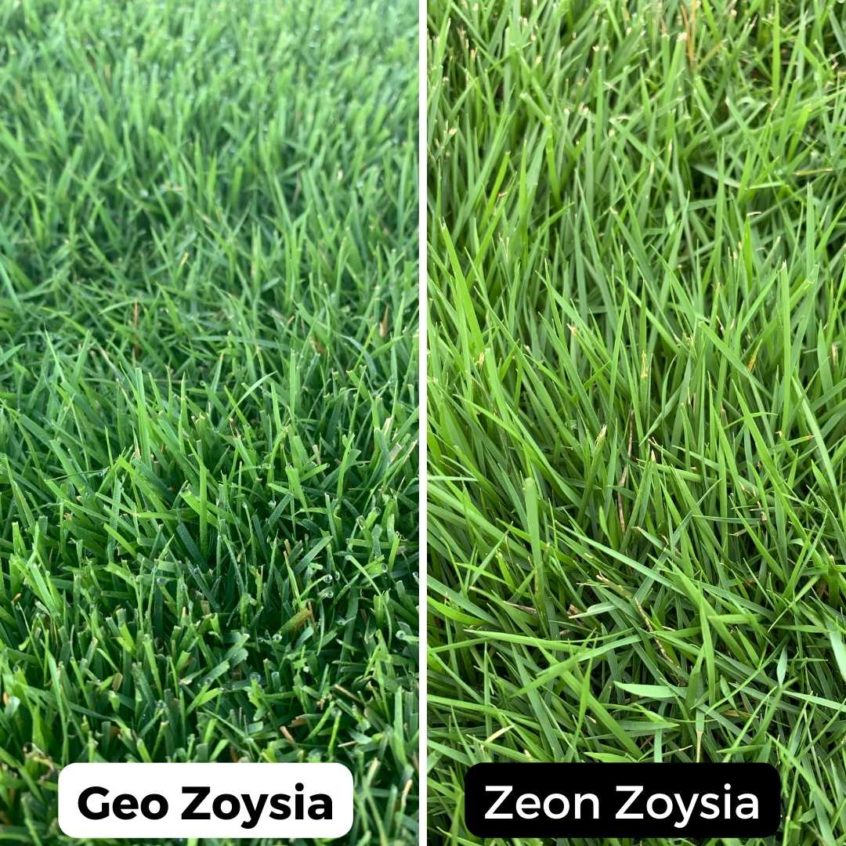 You’ve been searching high and low for the perfect, thin-blade or fine-blade zoysia for your lawn. You want it to look pretty, beautiful, luxurious – all the things that will make your family members swoon when they come home each day. You’re looking for a sod that can handle significant shade but can also thrive in the sunshine. Good news – everything you’ve just described is available in Geo Zoysia.

But, what’s the deal? When an Atlanta homeowner searches for a fine blade, shade tolerant zoysia, they might find Geo Zoysia, Zeon Zoysia, Zorro Zoysia, or Emerald Zoysia. One way to think about the differences between these sod types is thinking about brand names. Some people prefer Coca-Cola, and some people prefer Pepsi.

So many names for zoysia sod… what do they mean? Let’s break them down. 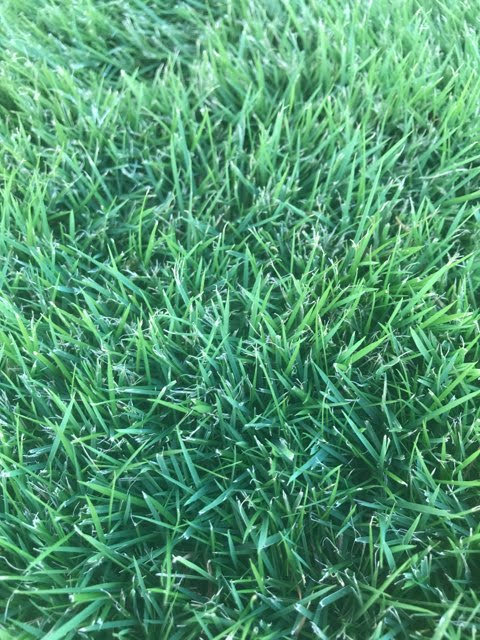 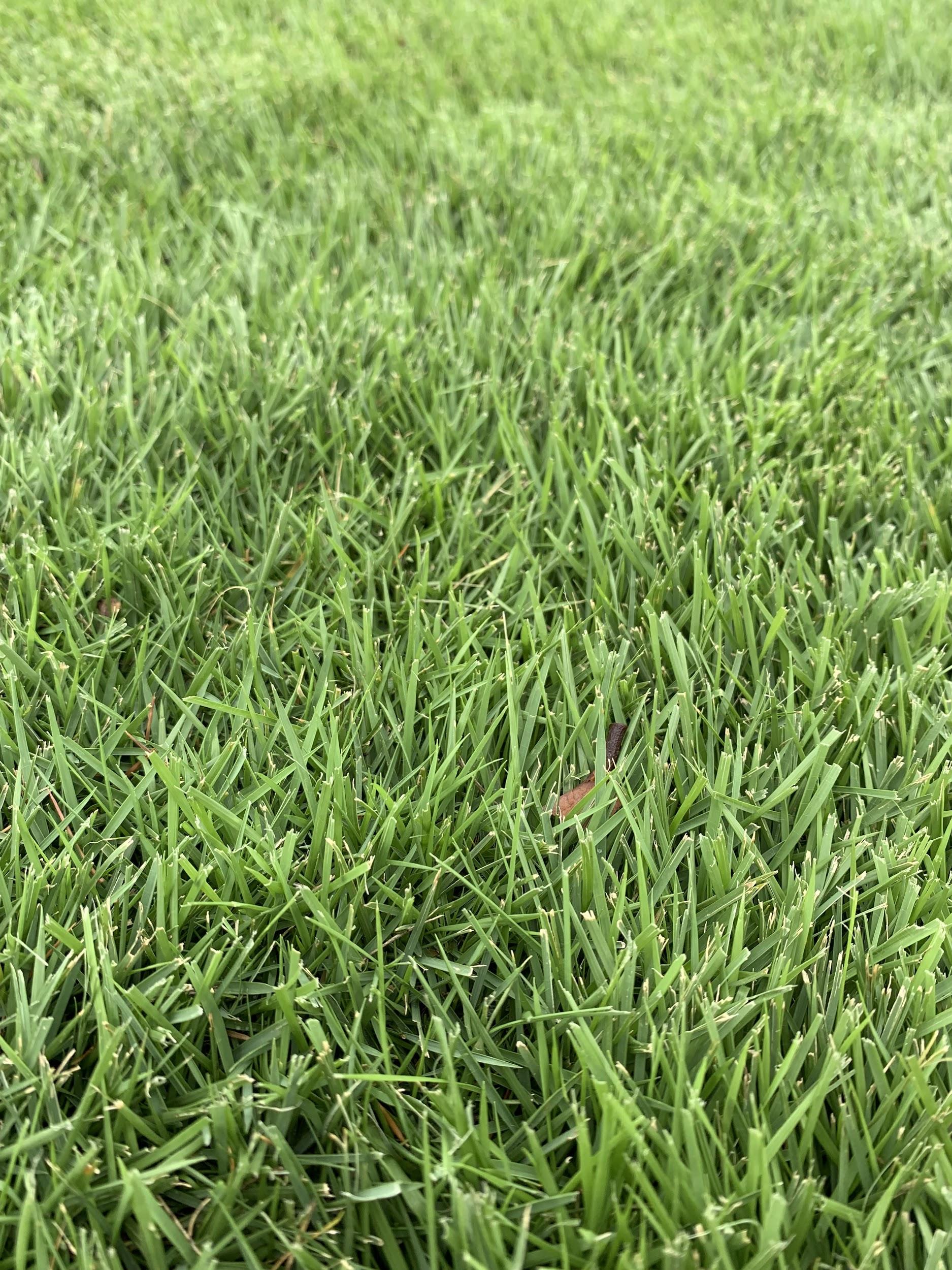 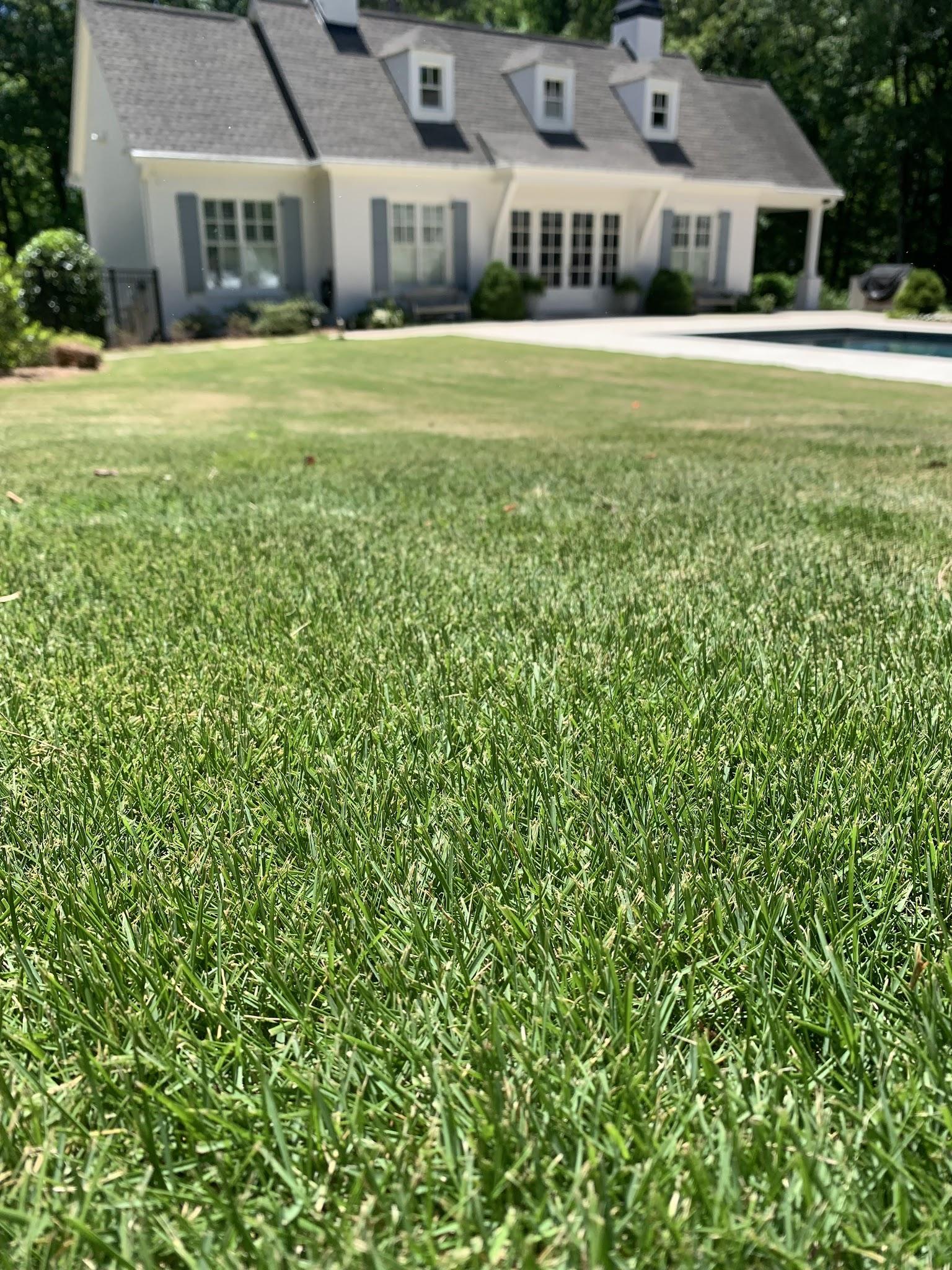 Geo Zoysia is a type of fine bladed, beautiful zoysia sod that is grown throughout the Southeastern United States. Legacy Turf Farms in Cartersville, Georgia has a few hundred acres of Geo Zoysia that is grown and cared for just 45 minutes north of I-285. Geo Zoysia has a long standing reputation for success.

A fine-bladed zoysia grass with a deep green color, Geo® Zoysia is one of the most beautiful turfgrasses you will find in a landscape. Geo has good to excellent shade tolerance, compared to other zoysia, and is extremely wear tolerant, making this a top choice for golf courses as well as residential lawns. If you want the best looking lawn in the neighborhood and are willing to perform a little more seasonal maintenance, Geo is a great option.

Geo® Zoysia is a patented and trademarked product of Sod Solutions, Inc. It has been installed in numerous suburban home lawns, wedding venues, and even some golf courses. Geo Zoysia is a wonderful choice for homeowners who may have mature trees that create shady parts of their lawn. If you have at least 4 to 5 hours of direct sunlight, or 5 or more hours of “dappled” sunlight, Geo Zoysia is a good choice for you. On the opposite end of the light spectrum, Geo Zoysia also performs incredibly well in full sun. This sod loves the warm weather that Georgia provides. Geo Zoysia thrives in many different soil conditions including sandy soil and clay soil – Geo can even grow and thrive in Georgia red clay!

Zeon Zoysia sod is so adaptable that it thrives in the heat of the lower South and cold winters of the upper South. It boasts a higher disease and insect resistance than some varieties of warm season grasses. It’s soft and plush, yet easier to mow than Emerald because it doesn’t require a reel mower.

Zeon Zoysiagrass is a luxurious and resilient turf grass ideal for use in the “sunbelt” areas of the country and stretches further into the northeast region than many other warm-climate varieties.

Emerald Zoysia is adapted to zones 7-11 and does well in warm, humid environments. It is an excellent grass for the southern and southeastern states. Once established it requires slightly more water than Bermuda. It is drought tolerant due to its deep root structure. Browning may occur in triple digit heat, but adequate hydration can restore its vibrant green color in a matter of minutes. The grass is moderately shade tolerant. However, it does not do well in full shade as compared to Rye and Fescue. An average of at least 4 hours of full sun per day is a good measure for healthy growth. Flooding is tolerated, but constant saturation will eventually weaken the grass. This zoysia has a moderate cold tolerance and can be damaged by hard freezes and is not hardy in transition zones. Emerald Zoysia is a very slow growing lawn grass. Zoysia grasses are generally slower growing than Bermuda, with Emerald Zoysia being one of the slowest growing Zoysia grasses. The grass exhibits a dense creeping growth, rather than an aggressive upward, or sprawling growth. The blade density is much higher than other grasses, giving a very dense, carpet-like, or “hedgehog” appearance.

Zorro Zoysia: Yet Another One That Starts with ‘Z’

Zorro Zoysia has a dark green color. The leaf texture is considered to be very fine bladed and very soft to feel. It is suitable for home lawns, golf courses, commercial jobs, and parks.

Zorro zoysia sod was released in 2002 and has become a widely used zoysia grass on the market. It thrives in full sun or partial shade and requires 4 hours of sunlight to thrive. Zorro Zoysia has a marginal regrowth rate from damage and good drought tolerance and can be mowed very low and frequently.

Zorro Zoysia is the one of the shade tolerant warm season grasses available in Georgia and the Atlanta Area. Handling as little as 4 hours of sun, Zorro Zoysia has been a suitable replacement for many Fescue yards in Metro Atlanta.

Though drought tolerant, to maintain a healthy appearance during the hottest months of summer, Zorro Zoysia needs about 1 to 1 1/4 inches of water a week. On sandy soils it often requires more frequent watering, for example, 1/2 inch of water every third day. A light green-grey color and narrowing of leaves indicate that it is time to water.

History and Genetic Makeup of Zoysia

There are three principal species of zoysiagrass used for turf: Zoysia japonica, Zoysia matrella, and Zoysia tenuifolia. These species are differentiated by texture, cold tolerance and aggressiveness.